The Columbus Science Pub: Science on the Cutting Edge 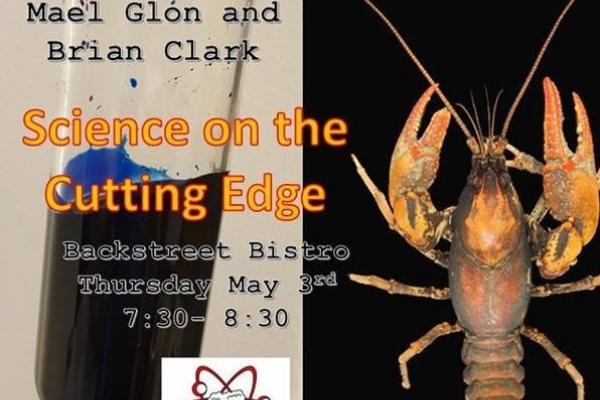 Join us at The Backstage Bistro for Columbus Science Pub! This month we are featuring three speakers all on the front line of research working on fascinating new problems in their field as they complete their doctorate degrees at The Ohio State University.

Madison Tuttle: Chemistry
In the age of electronics, society relies heavily on rechargeable batteries to power every-day devices such as portable laptops, cell phones, and increasingly, electric vehicles. Currently, lithium-ion batteries (LIBs) are the standard in rechargeable batteries, touted for their reliability and energy density. However, many LIBs have limited charging rates and contain expensive or environmentally hazardous transition-metal oxides. In the last decade, organic rechargeable batteries (ORBs) have become an attractive option to address LIB limitations. Madison with Dr. Zhang’s group is currently studying the use of an organic thiazyl radical compound as a sustainable, high-rate alternative to current Li-ion cathode materials.

Brian Clark: Physics
Brian works on experiments to discover cosmic neutrinos, tiny ghostlike particles billions of times lighter than atoms. They are created under exceptional circumstances--from the nuclear fusion of the sun to the cores of exploding stars--and carry the energy of thrown baseballs as they stream across the cosmos. To catch them, a team of researchers at Ohio State University are helping to build the world's biggest telescope—an instrument the size of downtown Columbus called the Askaryan Radio Array. The detector, which is under construction at the South Pole, searches for the puff of radio light emitted when a neutrino interacts in Antarctic ice. Understanding these shy spies will reveal valuable information about the most distant universe and fundamental information about matter itself.

Mael Glon: Biology
Mael’s work is a systematic revision of a widely-distributed group of burrowing crayfishes which he's temporarily calling the “devil crayfish group" (cause why not). Unlike regular crayfishes, burrowing crayfishes live in area where surface water is absent for part of the year. These crayfishes like all crayfish need water, so they access it by digging burrows down to the water table. He is especially interested in increasing the taxonomic resolution of the devil crayfish group because doing so may have important conservation implications and because these crayfishes are ecologically important.