College of Arts and Sciences- Department of Art

Brownie in Motion is a modular, room-sized camera obscura that functions as an immersive art installation, a functioning camera, photographic darkroom, and a didactic tool. Physically, this piece is a to-scale replica of an iconic Kodak Brownie box camera that has been enlarged 18.5 times to a footprint of 5’ 3” x 8’ 5”, with a height of 8’.

Viewers of Brownie In Motion are encouraged to enter the installation and “become the camera.” On the front of the camera are a lens and a small infrared sensor connected to the camera shutter. When the sensor is activated by motion, 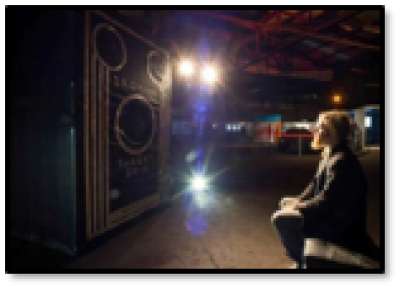 it opens the shutter allowing light to enter via the lens. The lens projects an upside-down image of the exterior onto a large spool of thin transparent fabric in the interior of the camera. This allows the participant to gaze at the outside world from inside the object in a manner similar to camera obscuras that were popular in 18th and 19th century.

Stephen is using his camera not only to educate but to create an important ongoing series of photographs that document practitioners of disappearing crafts and trades. All of the black and white images in this series are shot and chemically developed by hand inside of the camera obscura, much like early itinerant photographers of the 19th century.