How to Protect Species and Save the Planet—at Once

How to Protect Species and Save the Planet—at Once 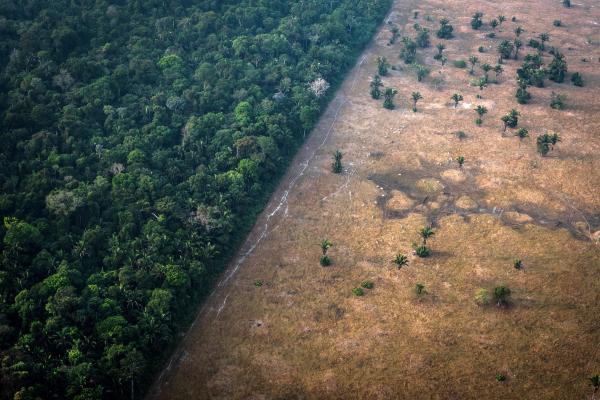 A major new report calls on humanity to tackle the biodiversity and climate crises simultaneously. Here's what that might look like.

HUMANITY IS STRUGGLING to contain two compounding crises: skyrocketing global temperatures and plummeting biodiversity. But people tend to tackle each problem on its own, for instance by deploying green energies and carbon-eating machines, while roping off ecosystems to preserve them. But in a new report, 50 scientists from around the world argue that treating each crisis in isolation means missing out on two-fer solutions that resolve both. Humanity can't solve one without also solving the other.

The report is the product of a four-day virtual workshop attended by researchers of all stripes, and is a collaboration between the United Nations’ Intergovernmental Science-Policy Platform on Biodiversity and Ecosystem Services, and the Intergovernmental Panel on Climate Change. In light of the Paris Agreement, it’s meant to provide guidance on how campaigns that address biodiversity might also address climate change, and vice versa.

The plain-language report should prove to be hugely influential not only among governmental policymakers and conservation groups, but also corporations, says Betsy Beymer-Farris, a sustainability scientist at the University of Kentucky, who wasn’t involved in the report but did peer review it. “It's hard for companies or even nation states to really distill academic literature,” Beymer-Farris says. The report both lays out the climate and biodiversity science and the social science of how to effect change with the help of the people who actually rely on the land for farming and grazing. “I definitely got excited when I reviewed the report,” Beymer-Farris adds. “I thought: OK, this is definitely different from what I've seen before, because it's a conscious and serious engagement with a more equitable and just way forward.”

So what might these campaigns look like? Say, for instance, you turn a heavily logged forest into a national park. As the trees grow back, they would sequester carbon in their tissues and provide habitat for the return of animals. Letting a forest come back naturally, rather than planting a single species of tree to offset some corporation’s carbon emissions, makes it more resilient. This is known as a nature-based solution, a campaign that both sequesters carbon and provides an extra ecological or economic benefit.

“You're helping biodiversity, and you may actually generate opportunities for people to use that system sustainably,” says climatologist Hans-Otto Pörtner of the Alfred Wegener Institute in Germany. Pörtner cochaired the scientific steering committee for the workshop that produced the report. But, he continues, if you create a monoculture, “there's only one use. And then if that crop that you're using there is hit by some catastrophe, you're losing that purpose altogether.”

A monoculture is less resistant to the ravages of a single disaster—like a wildfire—or the slower, constant stress of climate change. “When trees are stressed and sort of weak, they tend to be quite vulnerable to, let's say, attacks from insects and other sorts of diseases,” says report coauthor Almuth Arneth, a modeling expert at the Karlsruhe Institute of Technology in Germany. And if that species is pretty much on its own, and it gets stressed and dies off, now the entire new forest is gone.

Biodiversity is a sort of insurance policy against this. A naturally-growing forest includes a greater variety of species, and the odds are better that some of them will ride out a one-time catastrophe or endure ongoing stressors like higher temperatures and more intense droughts. Resilience is built into the ecosystem, because it’s been functioning for thousands or even millions of years. Its greater odds of survival also mean that it’s got a better chance of holding onto all of its sequestered carbon, keeping it out of the atmosphere and preventing further global warming.

Halting humanity’s attacks on ecosystems can also help fight climate change, the study’s authors write. The draining of wetlands for agriculture kills off species and disrupts an important process for sequestering carbon. Slash-and-burn agriculture in the tropics ignites concentrated underground carbon known as peat, which releases astonishing amounts of greenhouse gases. (Yes, peat’s not just an Arctic thing.) Protecting coastal mangrove forests comes with a particularly long list of co-benefits, the report points out: They sequester four times the amount of carbon per area as a rainforest, they’re home to a wide range of species, and they act as a barrier that absorbs the energy of storm surges.

Even cities can get in on the action, the report notes. Urban areas turn into “heat islands” because they absorb the sun’s energy during the day and slowly release it at night. They are therefore much hotter than surrounding rural areas. Planting more trees cools cities, and provides habitats for birds and shade for humans, which will be ever more critical as global temperatures rise. As an added bonus, green spaces are great for people’s mental health.

Which is all to say: People should be restoring habitats large and small. “When we talk about biodiversity conservation, we don't necessarily mean that we have to set aside 30 to 50 percent of pristine areas and keep people out,” says Pörtner. “But there will be a transition between places that should be real nature reserves, and places where we have mixed uses, and the areas being shared between biodiversity and human uses. These sustainable uses may actually represent opportunities for sustainable livelihoods.”

Consider agroforestry, in which farmers grow crops within a forest instead of clearcutting it. In Brazil, for example, some farmers are switching from raising cattle, which requires the obliteration of a forest, to growing cacao, which does just fine in the shade of trees. Researchers have shown that this boosts the biodiversity of the rainforest. It’s a triple win: Farmers earn a livelihood, the forest holds on to its carbon, and a range of species is able to thrive. There’s a lot of room to improve when it comes to agriculture, the report notes, as the global food system is responsible for between 21 and 37 percent of humanity’s total net greenhouse gas emissions.

It’s critically important that conservationists don’t just steam into an area and tell the residents how they’re going to preserve their lands, says Daniela Miteva, an environmental economist at Ohio State University, who wasn’t involved in the report. Local people know the area’s flora and fauna better than anyone—and there are plenty of ways for them to make a living off the land without damaging it.

“Based on my experiences, working lands should not be underestimated,” says Miteva. “Local communities are very familiar with these lands. At least in my opinion, the way to go is to actually work with them to make sure that they have an incentive to protect the forest.” For example, there are ways to log a forest sustainably, known as reduced impact logging. Instead of clear-cutting, loggers would carefully fell individual trees to avoid crushing surrounding vegetation.

That means the solution won’t be as easy as saying: Get people off the land and let nature take its course. And that’s not what the report is arguing for. The authors conclude there has to be a balance between the well-being of people and protecting the land they rely on. “At the end of the day, these are local decisions,” says biogeochemist Rich Conant, who studies nature-based solutions at Colorado State University but wasn’t involved in the report. “And it's going to continue to be very challenging to reassess this balance all the time as our priorities change.”

The big caveat, the authors stress, is that nature-based solutions alone can’t stop climate change. Ecosystems are only so resilient: As temperatures climb and droughts get more severe, it’ll be harder for forests, wetlands, and mangroves to survive, even with our help. First and foremost, humanity has to dramatically reduce its greenhouse gas emissions. “Nature is not going to save us,” Arneth says. “I think that is something that is going to be very clear in that report. We can only use nature to support efforts.”

Still, governments and corporations are becoming more conscious of the importance of maintaining biodiversity while also fighting climate change, says Beymer-Farris, from the University of Kentucky. Monocropping trees to offset emissions is out, and more nuanced and effective solutions are increasingly in. This new report could well accelerate that trend. “People might feel despondent over the status of biodiversity loss right now,” she says. “But I myself, as a professor who has been working in this for 20 years, I see a lot of hope, because I see a lot of change on the horizon.”