The Scientist Next Door Update: Making the Invisible Accessible, Virtually

The Scientist Next Door Update: Making the Invisible Accessible, Virtually 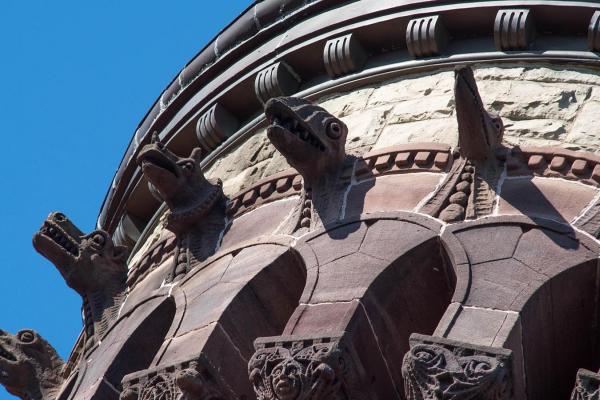 The Ohio State University College of Pharmacy tour shows research in action as every scene in the tour features actual scientists working in their labs.
From the School of Earth Sciences tour, this is the final puzzle viewers must complete to unlock their prize from the treasure chest. There are three puzzles in this tour which help viewers learn more about geology.
In the School of Earth Sciences tour, viewers are given a rock sample to study and carry throughout the tour. Each stop on the tour updates the viewers on how their sample has changed.
The School of Earth Sciences tour takes viewers on a virtual trip to the Orton Hall Geological Library. The most notable feature of this library, the artwork, is featured in this scene.
Previous Next
Description

Over the past six months, I’ve been with working with scientists and researchers on campus to construct Ohio State University virtual reality (VR) tours as part of The STEAM Factory’s BETHA grant. These VR tours, built by our outreach team at the Byrd Center using technology refined under a National Science Foundation grant, allow visitors to explore otherwise inaccessible locations on campus, such as scientific labs and buildings that are closed to the public. While the collection continues to grow, there are currently four tours available: the Arabidopsis Biological Resource Center, the School of Earth Sciences, the College of Pharmacy, and the Byrd Center ice core research facility. Also currently in development are tours of Kottman Hall featuring plant pathology research and two tours featuring the fish and tetrapod collections of the Museum of Biological Diversity.

Majoring in Data Analytics and Economics at Ohio State, my academic background is very different than the diverse scientific disciplines featured in the tours. An important part of my job in working with the researchers is to combine my technical knowledge of how to capture video and construct the tours with their scientific knowledge of their research area. Our common goal is to create a product that excites the audience and allows them to learn through new technologies.

The first step in working with a researcher is to establish a theme for their tour and articulate a list of locations to capture. For example, the College of Pharmacy tour focuses on the equipment that is used to conduct drug research. After deciding on the theme and locations, I loaned each researcher (Neil Mezache, Jonathan Jacobs, Courtney Price, Chris Conwell, Cynthia Canan, and Marc Kibbey) a GoPro Max to capture the 360o images that would later become the scenes in the tour. With the pandemic, I had to create instructions and support materials that would allow collection to occur without me being present. Once these images are captured and rendered, the most collaborative part of the process begins as the tour is designed.

In this designing step, I work with each researcher to map out the sequence of scenes that compose the tour and refine the content through an iterative process. The core audience for these tours is youth and families, so the information needs to be understandable to those without a lot of scientific training. For each scene, the researcher identifies objects they want to highlight in the tour, including captions to go with each identified object. Researchers also frequently ask to include additional pictures or videos in this step. These supplemental materials can highlight details that are missed at a distance by the GoPro’s fisheye lens. To support the iterative nature of these collaborations, I’ve developed planning documents on Microsoft Teams that I share with each researcher as a central hub for them to record information and refine their ideas. The planning document makes the content creation processes more efficient and allows for flexibility as we work asynchronously to select content and refine the text to be comprehensible to our audience. Teams has also eliminated the need for sending versions of the document back and forth via email, significantly decreasing the time it takes to refine a tour. I can provide feedback, often the same day, on the document as the researcher works through writing their captions. Writing the captions and working through the feedback is the longest step in the tour building process, sometimes taking a month or more to complete. The overall goal of each tour is to develop a learning tool that is compelling, so it is important to work slowly and thoughtfully when developing the content.

Finally, once everyone agrees on the content, it is time to build the VR tour. We utilize a variety of software, including GoPro tools, 3DVista, and Adobe Creative Suite to name a few. The Byrd Center has made many VR tours for outdoor landscapes in remote regions of the world, but one of our unique goals with the Ohio State campus tours is to try out different features to make the tours more engaging and increase retention of information for users. In the School of Earth Sciences tour, users carry a rock sample through each scene and learn about changes made to the sample as they move through a series of analyses. Along the way, viewers solve puzzles related to the sample. Another goal of the campus tours is to make them accessible to a wide audience, including those users who are visually impaired. An audio-guided tour was created by Cynthia Canan as she virtually navigates the College of Pharmacy tour while narrating each scene. Currently, this feature is only available for the College of Pharmacy tour as a proof of concept, but we plan to add something similar to each tour in the near future.

I have had a rewarding experience developing these tours. Not only has every researcher been great to work with, but I have also learned a lot about science and the research going on at Ohio State through the process. I have even had the opportunity to explore some new and interesting areas of campus I did not previously know existed, such as the Kottman Hall Green House and the Geological Museum inside of Orton Hall. I hope with these tours, others will be able to have a similar experience, virtually, and can learn more about the exciting research happening behind the scenes at The Ohio State University.

To explore the Virtual Reality tours of campus, point your web browser to go.osu.edu/campusVR/ using a desktop, laptop, mobile device, or should you have one, VR headset.