Visualizing music: the history, and promise, it offers audiences and musicians

Visualizing music: the history, and promise, it offers audiences and musicians 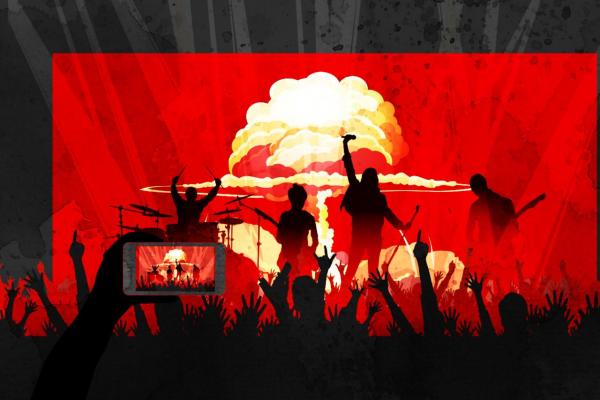 Adding visuals to music shows up everywhere now. In YouTube videos, in pop concerts, even in Christmas light displays. Seriously, what would a Beyoncé video be without dancing? Or a Metallica show without explosions?

But visualizing music hasn’t always been a thing. Even today, in some circles, it’s frowned upon.

Anna Gawboy, associate professor of music theory at Ohio State, has studied visualizing music from its roots, even creating her own performances (check out this Ohio State collaboration, or this one with Yale School of Music, more recently performed with the Royal Concertgebouw Orchestra in Amsterdam).

According to her, immersive experiences have numerous benefits to the music industry. And now, as many organizations are trying to rebound from COVID shutdowns, it’s more important than ever.

What is the goal of visualizing music?

The goal is awe.

If you go to a concert at the Schottenstein Center, a Cirque du Soleil performance — any highly popular performance that involves the coordination of lighting design, visual design, acting and music — when  everything comes together so perfectly and is timed just right, it’s an inspiring and uplifting experience for the audience.

You can see a beautiful lighting display or listen to beautiful music, but there’s something so awe-inspiring when all those things come together. There’s something special about the combination of these different sensory modalities and a heightened experience of pleasure and amazement.

What is the history of combining visuals to music?

This idea has been something people have found compelling for millennia. The combination of music and other arts reaches back to ancient performance traditions all around the world, beginning with dance and music. In the 20th century there was a renewed attention to this relationship, powered largely by new discoveries of synesthesia.

The first case of synesthesia was in the early 19th century, but as the century progressed, more cases were observed, and psychologists started getting really interested in it, as well as occultists and artists. It became a cultural phenomenon, and it gave rise to all kinds of new experimentation in the arts.

This was happening at a time when new technologies were arising for visual mediums, specifically film. Moving pictures were considered a huge breakthrough for artists. People were very excited that moving pictures could convey musicalized movement in time.

Is visualizing music a way to get more audiences interested in classical music again?

Yes. The performing arts in every genre are at a real crisis point because of COVID. Broadway is going back to 100% capacity in September, but a lot of shows won’t come back. It’s going to be a long time before regional symphony orchestras can offer shows as they once did. But there are also issues that have been emerging for years about the aging of the symphony-going public.

In the classical performance model, a bunch of musicians get on stage; they perform; it’s excellent; and the audience claps. That’s increasingly foreign to younger audiences. Even before the pandemic, creative and performing artists were rethinking this format in new and exciting ways.

Young audiences listen to more music than they ever have in the past. But the type of listening they do has changed radically.

Listening isn’t attached to a single place. Younger people always have devices with them, and their listening is integrated into their environment. Getting out of the concert hall and meeting listeners where they are, whether that’s in a park or in a plaza, is a good idea.

But we also know a lot of people are listening to music on YouTube and TikTok, which always includes a visual. When the shows are in the concert hall, adding visuals can not only provide a familiar point of reference, but it can help tell the story and structure of the music. It can clue the audience in to things they wouldn’t notice otherwise.

This is the time to really have a radical rethinking of what the concert experience is.

“Young audiences listen to more music than they ever have in the past. But the type of listening they do has changed radically."

Along with bringing in younger audiences, is this a way to be more inclusive also? Say by using visuals to include the deaf community?

But seeing visuals that are synchronized with those vibrations — a visual that is rich and complex and multi-textured, an analogous visual representation of the sound — provides additional information and allows them to further interpret the vibrations they’re feeling. This is something that has a lot of potential.